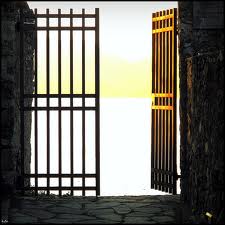 A man died today.  Men die everyday, as do women and children.  But this was a man who used to work in the office I now occupy.  It doesn’t truly affect me as I didn’t know the man, and beyond compassion for the widow – although she doesn’t seem to want any – this death touches me only lightly.

I think about death often; maybe because of the disease, but more likely because I am human and I know, like everyone else, my life is finite.  When I was younger I thought about starting the journey towards death a lot sooner than I do most days now, although the meds don’t keep all thoughts of that darkness away.  For the most part, however, I like to imagine walking through those pearly gates, and Saint Peter leaning down to say, “Library is on the right.”  And there I would go off to never-never land spending my eternity in the greatest library of all time.

I wonder, often, if our religion in its desire to make us feel good when we honestly can’t, has built a vision of a place that can’t exist.  And although I know that if one were to look at the beginnings of Earth there would be similar questions, I still have a hard time truly believing that an atmosphere that we as humans have made up in heads is in fact true.  Oh, everyone knows someone who claims to have come back from the dead, but ultimately couldn’t that be in our mind as well?

Death is a fact of life.  We all know that it is coming. Sure we don’t know when, we don’t know where or why, but it is coming.  Someone once said to me (and I later learned it was a famous quote) “Don’t fear death, you just lay there.  It’s living that is hard.”  Whenever I am reminded so forcibly that there is a death coming, I try to remember that living is coming is as well.

I am not sure what living entails. It seems to grow, move and change almost faster than I am.  It seems to take life, as well as occasionally die, and it pulls through my fingers as if it is a reel and rod.  I have never been able to capture life, not in a photograph not in the much revered child’s smile.  Every time I try to take a piece of it, it seems to have already passed me by.  It becomes a memory before I know that I am even thinking about it.  Life is altogether more than I have ever imagined.

Despite the fact I can’t seem to capture it, it does seem to sparkle, shine.  It seems to enfold me first in warmth, and then in a cold, darkness that I imagine is a product of my nightmares, my fear.

And I find that the hardest part of life is that there is so much I want to do with it.  Yes, I have responsibilities; yes, I have a disease.  But even in my darkness, my deepest depression and cold, there are things that I want to do and things that I need from life. There are places I need to see, even if only through my imagination, and there are things I have to do, even if the world questions the very disease they wish to attribute the desire to.

Life that fickle, b–ch, wants me to live it.  And yet, after thinking about that list of things that I want to do, all I can think about is the darkest nights, and the silence in midnight.  Let the rest begin.

1 thought on “And The Rest Begins”