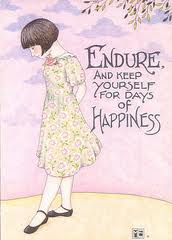 I have read the poetry, the verses, the single lines of uncomplicated sayings.  I have tried to hold onto them, even going so far as listening to that ridiculous song by Bob Marley, “Three Little Birds.”  I have read the books, the Bible, the Koran.  I have read passages that seem to say the right words, but be written for someone much different from I.  And it isn’t because I have lost hope, it is simply I have lost the patience for three words that are so rarely worth more than the paper that it is printed on.

When I was a teenager I actually kept a journal of sayings, little tid bits that I thought were cute, or soulful, or at least worth a moment of my time.  I got them from signs on the road, bumper stickers, and cards that others sent.  I took them from lyrics, from the Bible, and from the places that seemed to have more sayings than they did truth.  If it gave me a moment of peace, of happiness, of silliness, of simplicity, I wrote it down.  I wrote it in black ink, in blue; I wrote it with silly hearts and simple blocks.  I kept them.  But the funny thing is, I never went back and read them.

It didn’t matter to me that for one brief moment they made me smile, or brought a tear to my eye.  It didn’t matter to me where they were from, who they were written to, or ultimately even what they meant.  It was the quest to find them.  The joy in discovering something new.  Not the thing, the discovery itself.  And it lasted for years.  I probably still have that book somewhere; but despite the fact I have not been a teenager in a really long time, I have no more interest in those sayings than the discontent I felt five seconds after finding them the first time.

I don’t begrudge others there need for simple comfort.  I know many who need those little words to speak to them.  Every Sunday I see so many, eyes bright, noses turned toward Jesus himself, hoping against hope that something profound will be said to change their daily lives.  The greeting card industry makes billions, and no one can ever say Taylor Swifts’ little words don’t touch the hearts of people across generations.  There are those that need little words.

I suppose the truth is I need them as well.  The problem, as I see it, is there are so few that actually do the job.  There are always ones that can make me smile, but words despite how much I use them and find them, rarely, if ever actually comfort me.  They explain my darkness, the path that I find myself on, they even can explain my misery; but they can’t offer that little bit of hope that I so desperately seem to need.  Writing, and using words, certainly takes my pain away, lessens the hold this world has on me, but it can not truly cure.  It can not act like a band-aid, gauze wrapped tightly around my shoulder, or even a structure binding my soul together.  It can give just a moment’s happiness, in a world that has so little.

I suppose that many will believe that a moment’s happiness is as important as the air we breathe.  The one compliment, that one note of love, that one pat on the back can feel for a moment as if we have seen the face of an angel. But despite a word’s power, it is certainly fleeting.

All of this means, the thing I love the most in this word (besides my children) may bring moments, but I don’t believe it should bring lifetimes.  When it comes down to reading words to find life, or finding life in something so much more powerful than a word, you know which one I shall pick.  Words can change everything, but let us stop allowing them that power.  Instead listen for something much louder than those groups of letters that surround our lives.

Does this mean you should put down the book that is taking you on a journey no dream can give you?  Does this mean stop reading that sweet romance in your hand in favor of staring out the window?  Does this mean practice calculus instead of the beautiful poetry of Virgil?   No, those words are much different than the same words I am speaking about here.

On one final note, there are some words that do make me feel.  This is one that lasted more than the proverbial second…”Endure, and keep yourself for days of happiness.” Virgil.