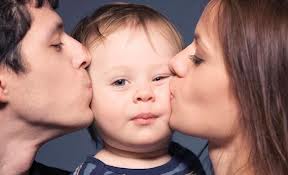 Guilt.  The most destructive emotion that I can think of for a parent with a child who has a disease.  There is no place for guilt, no place for the emotions that accompany the guilt, and it can destroy your child as easily as a slap across the face.

Parents, especially new parents, of children with bipolar feel guilt.  It is perfectly normal for parents to wonder if they gave their child the disease, if they did something wrong during pregnancy or in their child’s young lives, or wonder if something could have been changed so their child didn’t have to suffer.  All parents of those with diseases feel this; they have support groups for it.  But the truth is, you didn’t cause it.

Bipolar, like many diseases, is genetic.  We get it from somewhere. I got it from my grandmother, through my mother.  The genes that my grandmother and mother carried brought this disease to me, probably. It is the most likely explanation for why I have this disease.  However, neither my mother nor my grandmother wished this disease on me, no one waved a magic wand, and no one did something so atrocious that I was punished with this disease.  Doesn’t work that way.  I didn’t pick my genes, and in many real ways, my mother didn’t either.  Is there such things as calculated risks? Yes.  But my mother had two children; one with the disease, one without.  We both came from the same place, we are both female, and we are both relatively healthy.  We had the same childhood.  So why did I get the disease and my sister did not?

I think I blamed my grandmother for all of three seconds, once.  Then I realized that she didn’t hand me the disease like I would have a chance to refuse it.  It wasn’t her fault she got the disease, and it certainly wasn’t her fault that I did. In fact, it was grandmother, probably more than anyone else, who actually saved me.  From the moment I was diagnosed, it was my grandmother who sat and talked to me.  Spending hours talking, telling me stories, teaching me what to do and what not to do.  It would take years for me to realize what she was giving me, but it is a gift that was as beautiful as it was selfless.

My grandmother was bipolar in a time when it was not diagnosed, and the most advised prescription was either shock therapy or alcohol.  She had both.  She told of her reactions, her regrets, her mindset, and her destruction.  There was no filter, just an understanding that stories were for me, and me alone.  I never share her with anyone, even her own children that have a skewed and false impression of their mother.  I do not try to correct that view, it is their own and they deserve to reconcile it by themselves.  But it was still my grandmother that made this disease palpable.

I imagine that my mother felt guilt.  I imagine my mother, like most mothers wondered if she caused this, or just felt the supreme guilt knowing it was through her genes that I got this.  However, that guilt, that feeling, would not have helped me at all.  It would have made it all so much worse.  Telling a child that you feel guilty for causing this disease is destructive.  Don’t do it, don’t hint at it, don’t even think it.  Get over it, bury it…move on now.

Let me tell you what your child will think if you even hint that you feel guilty…your child will begin to wonder if they can make you feel better.  Could they make you feel better by not talking to you? Not making you buy all those medications? Not spending the money on doctors?  Could they make the guilt go away, by taking themselves away? By disappearing? By dying?  Would it be better for you (as a parent) if they had never been born?  A child with a mental disease doesn’t need these questions, trust me most of them are already there.  They don’t need the iota of an excuse to answer those questions.  Guilt is destructive, not only to you but to your child.  If you can’t deal with the guilt, either get help or get the hell over it.

Guilt is selfish.  Your child will not have a chance if you are stuck on selfish.  They won’t survive this disease.   You didn’t give them this disease, even though you carried the genes, so get over yourself.  This disease sucks, but your acknowledging/talking/confessing your fears/guilt/anger won’t help anyone but your own self.  Your child doesn’t need it.  I simply can’t say this enough.

Parents are human.  I have two children, one that is five and one that is three.  I, literally, watch my three-year old like a hawk, constantly worried that at three years old she is going to show some sign that she is bipolar.  Will she? No. Can she? No.  The disease doesn’t even manifest itself for years.  My three-year old may be bipolar, but I won’t know for a long time.  I still watch her.  I still wonder and question stupid little things she does.  I am human.  And it is perfectly normal.  But here is the key, she will never know. I will do everything in my power to make sure my three-year old never knows my fears, my guilt or my worries.  She will be protected from it with all my might.

I am not a mother of a bipolar patient.  I am not a mother of a mental diseased patient.  I don’t know what that feels like, I can only speak to what it feels like from my side.  I know what emotions attempted to destroy me, and what emotions helped me.  I know the people who literally saved my life and those that I almost let kill me.  I know because I listened, and I know because I learned.

Your child deserves your love, to share your happiness and to be your light. They do not need, deserve or should ever earn your guilt, your anger or your fear.  This is for every parent, but even more so for parents with children who are suffering.  It is never the job of the child to comfort the parent, that is against every basic law in nature.  It is your job to be more for your child, to be everything they need.  They will not appreciate you for it, they will not thank you for it, and they will not even acknowledge it.  But they will survive with it.  They will be more than a disease.  And as a parent, there is not one thing in this world I want more than for my child to be more than any definition we give them.