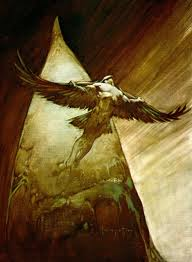 Have you ever heard the Greek tale about Daedalus and his son Icarus? You are probably trying to scrounge your brain trying to remember that story, out of the thousands of greek myths that we know.  Let me make it easier for you.  Remember the guy who flew to close to the sun? Now you remember.  Daedalus, a master craftsman, created wings out of feathers and wax so he and his son could escape the prison.  His son Icarus, desperate to escape immediately, ignored his father’s warning, and used the wings to fly away.  Unfortunately for poor Icarus, the wax melted the closer he got to the sun. We could argue day about the moral of the story, what we are actually supposed to be learning, but that isn’t my point.  My point is that there are days that I am Icarus; desperate to fly and the sun is just a glorious reminder of the beauty and freedom that exists beyond my own world.

I spent the last week in the dark.  The episode was a little longer and little stronger, than I have gotten used to in the last couple of years.  This days, after almost fifteen years of the same curse, I have learned how to cope.  I have learned how to take the steps to mitigate the damage.  I wasn’t able to do this, at least with any results last week, and I am just now beginning to recover.  My husband literally looked at me last night and said, “Good to have you back.”

There is just a tiny problem.  My wings are getting extremely hot.  Let me use a different analogy since that’s all I got today.  Imagine that you are bouncing calmly and nicely on a big trampoline.  You hair is lifting off your head, you are desperately moving your arms to find balance, and you are trying to watch the world as it moves up and down.  Then, maybe through no fault of your own, you begin to go higher.  The harder you jump, the lower the trampoline goes, the higher you fly.  For me, this is one of the best ways to describe my episodes.  And don’t expect that leaving darkness, means you are flying in the light.

I went down far last week; farther than I have in probably a year.  And because my brain is like a trampoline, I am now flying higher than I have in a year.  I am all over the place.  I talk faster, I talk louder.  I laugh longer and tell better jokes (seriously, they are better jokes).  I even type the words on this screen much faster.  My sleep schedule is off and on and doesn’t show any true sense.  Colors are brighter, smells are stronger, and the love and happiness – including the giddy kind – is overpowering.

This is the tough time in my disease/journey, because this is the time that people don’t understand.  They don’t know I have a disease, therefore, they don’t know that all the symptoms I am having is just a part of it.  Instead they look at me strangely, and I often hear the words, “calm down.”  Many won’t actually say something to my face, but they will latch onto each little moments of my life and try to justify them.  She wasn’t like that last week; what do you think happened.  I had one group, after a particularly nasty episode, claim that I had a mental breakdown.

Most people will take your darkness and assume that you are tired, or you had a fight with your husband.  Or maybe you got some bad news.  But they don’t know what to do with the highs.  It is not as easily explained unless I won the lottery and then wouldn’t I be yelling that to everyone?  The darkness may be scary, but the light shows them all the horrifying beauty of this sickness.  I would take a million days in darkness, just to not have to feel one day in this bright of a light.  And if you are wondering, there isn’t a pill in this world that can help as you move from one dramatic world to the next.

If I can keep those jumps on trampoline calm and controlled, life works for everyone.  It is only the times when I just to far down, that I can’t control the flight.  And every time I fly, I lose a couple of feathers.

I always thought Icarus, while selfish and young, had the right idea.  Take your wings and go; and go fast.  Fly for as long as you can, as far as you can until the wax simply can’t sustain itself. You will get an amazing glimpse of this life, one few ever see and while it might be only for a moment, sometimes a moment’s perfection is worth the loss predicted. There are no wings waiting for me, and I am pretty sure if there were my husband would burn them long before I could get them on.

So instead I try to fly on that trampoline, knowing that for every time I go up, I have to go down.  For every time that I confound, confuse and lose the trust and friendship of those around me, I gain nothing but another moment of reality. Everytime I move along the wide spectrum of this disease I lose myself in so many ways.  Which is why if on those jumps on the trampoline I happened to spy a set of wings – I might just go for a flight.

1 thought on “Flying too Close to the Sun”