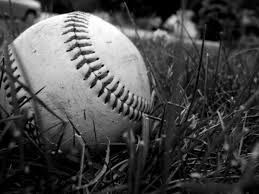 Last night, I spent 100 uncomfortable minutes, sitting cold and sore on a set of torture bleachers so that my son could play a baseball game.  As he is six this means many, many long minutes when my child plays in the dirt, and then one or two seconds of heart pounding fear as my little guy walks to the plate and tries to channel Hank Aaron.  It is a roller coaster of emotions, often interrupted by my bored to tears, four year old daughter.  Really, there is only so many Cinderellas we can color.  So she has to be watched at the same time I am trying to keep an eye on my little guy and not miss a moment of potential greatness.

My son is skinny, cerebral, and has never shown one ounce of real sports talent.  I don’t mind, as my intention in signing him up for that great American game, baseball, wasn’t a college scholarship or a contract for the Yankees. I just wanted to get him out of his cerebral daydreams and into team building and having physical fun.  My son is not the bravest kid out on the field, and I know you may think I am exaggerating, but the boy is also the slowest runner this side of a turtle.   Every time he has to run to first to beat that thrower, I almost just close my eyes and pray.  As the kid has actually been lapped on the baseball field, you can understand that this is somewhat a humorous and fun moment for his mother while at the same time being frustrating at the Gods for not giving him the speed that will keep him from being teased.  Speed is just not my kid’s strength; but it is a quirk of nature that simply makes my kid the greatest in the world.

So there I was last night, holding my daughters color page as the wind tried to blow it in the woods (mad and crazy tears would have started if this succeeded) and keeping an eye on Derek Jeter in the form of a little six year old boy.  What was different last night than any other night since my children starting playing competitive sports is I was the only one in the stands cheering him on.  I was the only family member that could make it…we won’t count the four old girl singing show tunes at the top of her voice because she thinks if no one is looking, no one is listening.  I stood in the stead of my husband, my mother, and the other varied members of this family I was given.

And because there was no father yelling encouragement, because there was no Grandmother with her arms crossed watching so intently, my son had the game of his life.  For the first time ever I saw a potential big leaguer.  And while I was sad and disappointed that no one else got to see, especially his father, I realized something; maybe the reason he channeled Mickey Mantle is because for the first time there was no pressure to perform. Maybe he just had fun.  Maybe without the yelling, without the stares, without the need to prove his own greatness, he could be great.  He caught balls that a week ago he would have dropped.  He hit off a pitching machine not once but twice, something that has never happened.  And he played the position of catcher with absolute glee and absolute wonder.  You should have seen my little skinny dude decked out in full catcher’s uniform catching balls as fast as they came, and calmly throwing them behind him.  I didn’t know he could do that; I don’t think his father thought he could do that.  But instead of yelling like crazy, instead of giving him pointers, I simply watched and for the first time in my life spent a game not cringing, not worrying but having as much fun as my son.

Fun should be the point at six years old.  The game is almost redesigned so that they can; there are three outs, or the teams change places when the whole lineup has bat.  Every inning each child plays a different position, and the coaches are right there encouraging, and physically moving the children into the right places.   It should be relaxed, and last night I think my son found out what happens if you take your own talent, your own self, and simply play a game.

It wasn’t all great.  Besides the steel corrugated seat I had to sit on, and the fact the potty was about a mile away (a really long distance for a four year old), there were the Prada Mommas.  If you are a Prada Momma, I apologize if I offend you, but quite frankly, you are a sight.

Prada Mommas are those mothers who come to games simply to see and be seen.  They are dressed in designer clothes, leading a beautiful animal of indistinguishable breed, with no hair out of place, and enough makeup to look like they are ready to hit the big screen. They gossip, they talk, and they laugh…loudly.  They trade barely heard insults, and they have never once thrown a baseball to their son.  They are not interested in which position their son is, or how they hit, unless they are being forced to care by the pack they have aligned themselves with.  They come and go with Prada sunglasses and Prada handbags as if they have very important meetings they must attend at seven o’clock at night.  They are trim and so skinny there is simply no way they could also work for a living; there isn’t that much time in the day.  They are rich, entitled and are there to gather as much ammunition about their child’s friends and parents as they possibly can.

They intimidate me. They make me nervous, and uncomfortable.  I do not wear designer clothes, although my children have been known too.  I don’t wear expensive jewelry to a child’s baseball game because it would simply annoy me.  Walking back to the car, only the other side of the city practically, I often am carrying a baseball/bat bag with various necessary equipment to play the game, sweaters, snacks, purse, and any and all necessary items to keep my child entertained for 100 minutes.  It is how I stay if not trim, at least in fighting form.  But these women don’t have to carry any of that.

Don’t get me wrong, they froze in their designer clothes last night.  Seeing the goose bumps on their flesh helped to humanize them.   Seeing the flesh turning a little red in the wind, just made me feel a little better.

Prada Mommas are a species that don’t make sense to me. And while in my weaker moments I sometimes wish that I could at least try to be like them, in order for them to stop intimidating me, I have long realized that I am simply not that girl. I am the mom who goes months without a haircut, or even allowing the application of dye to my grays.  I am the mom that drags a thousand things to a six year olds’ baseball game, so my son will feel like a real player, and my daughter will have something to do. I am the momma who likes her old, worn in jeans, and her tennis shoes.  I am the mother who likes to occasionally do a victory dance for my son so he can see how happy I am.  I am the mother who will easily and happily make a fool over herself, if that is what my child needs.

When you have children, there is no way to predict the kind of person you are going to be.  Will you be a Prada Momma, or will you find your joy in other kinds of happiness?  It isn’t easily determined when that baby is kicking you in the ribs or causing you to pull over and throw up on the side of the road.  But you learn. You learn out of necessity and you learn out of trial and error.  But whether you are a Prada Momma, a mother who yells at her son constantly while he is playing a friendly game, or one that catches her breath every time you get a glimpse of something new, you will have to decide.  I guess it doesn’t really matter, as long as your child is loved. I suppose even Prada Mommas with heart can love.