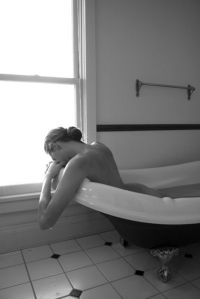 Have you ever built something so high in your mind and soul that there isn’t even a sense of desperation when you lose it? Have you ever been so sadden by a realization that there was no way to suffer, no way to mourn the reality? You got it so wrong that even the darkness won’t hide the truth of the mistake you have made.

So you have to live with the realization that you made this mistake. You have to allow it to sit on your shoulders and on your back and beat you until you literally can’t walk anymore. You have to allow this mistake to overtake your reality until you can put it in some hole, in some part of your world that will forever be hidden from you. It is a realization that once buried you will never seek again. It is a realization so devastating that you will purposely never speak about it.

Your therapist will ask, the therapist after this one will ask about this demon that lives inside of you; but you will never speak of it. You will never share this pain even with those who would benefit from knowing that they aren’t alone in their misery. It will be the child you don’t bore, the love you don’t seek, the truth you ignore.

It will live inside of you like many secrets. But unlike the secrets that can easily be explained if not resolved, these desperate truths can’t be spoken because they can’t be formed. They are too large for our small human brains, and they are too small for our vast imaginations.

They are not regrets. They are not things that you did wrong. They are much, much worse. They are the hopes, the dreams, and the anticipations that were never yours to begin with. They belonged to others and you have to break wide open the knowledge that you were never meant to know these truths.

Sometimes those around us demand that we examine all that is around us. They make us come to terms with the idea that we are not perfect, that we have interesting parts that don’t necessarily make any sense to the rest of the world. We are pieces and while we spend a lifetime trying to glue them together in reality we never will because we will never be able to fit the realization that we had it wrong into the rest of our perfectly messed up psyche.

I came across my realization about two weeks ago. Two long weeks I have been sitting on the truth. The knowledge that what I thought was my life, actually isn’t. The realization that what I counted on, secretly, under my breath, and far deep in my heart, was simply an illusion in order to ignore the truth of my life. The life I have created, and the life I am finally learning to live.

At first I thought this break in my journey was just that a break; a moment out of time that required my attention but wouldn’t fundamentally change the person that I am. I was wrong.

When you realize that even your brain, your heart, your soul can betray you by giving you answers to questions that were never meant to be asked, you realize that in your humanity you are not only flawed but you are weak. You learn that life doesn’t come from the sun, the oxygen but from the very real knowledge that those things you believe in doesn’t actually mean anything to anyone else. Those dreams that you once believed were real, are in fact an illusion.

And it is painful. And it makes you cry; even when you have spent a lifetime not only hiding from your tears but have spent a lifetime ignoring every time the world tried to tell you the truth. For the ignorance is yours. The blind stupidity in believing a truth that never existed is no one else’s. And although you pray desperately deep into the night to the one you feel closest to, this was never a sin to fix. This was never a mistake to ask forgiveness, this was never in their hands. It was always in yours.

I suppose that there are those out there who would tell you that this is part of the journey. This is part of life that you must go through. This is the hard part that allows you die in the peace when that time comes.

I once had a dream that will never come true and there is a part of my adulthood that can recognize that I held on so long for this dream not out of desire but out of a need of safety. And I think that the one thing lately that has slowly been stripped away from me, is safety.

The safety of disillusionment. The safety of believing with all your heart that who and what you are deep inside is exactly who you are when you close your eyes in the middle of the night. The world may not see the pieces but you can.  Then that safety is ripped away and you are left with the realization that there is no safety. Safety is the illusion that you built to protect yourself. It’s not there.

I know instinctively that the world that I live in can’t make this better; there are no arms, no hearts, not even an alcoholic beverage that is going make this better. I am not only on my own there is no one else I can share the burden with; it is my stupidity and my mistake.

And while I seek no forgiveness because again, I have done nothing wrong, I wish with all my heart that this was simple enough to simply chase away.