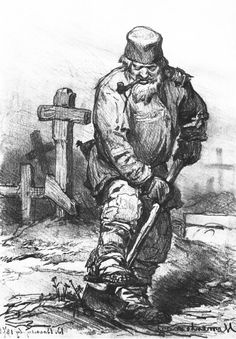 Have you ever watched a grave digger work? There is something poetic about the give and take of his muscles as he creates in the earth a place for a life to finally rest. The easiest comparison may be fly fishers and their casting of lines; the back and forth rhythmic motion that lulls one not necessarily to sleep but rather to a state of relaxation that allows forgetfulness to the true purpose of the task.

A grave digger is a romantic and solitary figure in literature and art. A solemn figure who routinely handles the task that others shy away from out of superstition and fear. A single figure, often depicted in a long coat, singing a song of soft pain; a human asked to perform a task that must be done.

And he does it, each and every day, he does it. He carefully puts that shovel into the dirt, bunches the muscles in his back and carefully transfers what will one day become each of our own beds. I also imagined him to be raggedly, gruffly in his appearance, and above the mortal comments of those who would judge him. And it is each grain of dirt that he so carefully moves that will one day prove to be our own voice.

I don’t believe that the soul is made to overcome. I think that from the time we are born until the time we are left in that grave diggers’ hands we are at most a lost and sordid soul, and at best simply blind. I don’t think our soul forgets the grains of dirt that will make their final proclamation any more than I think our soul forgets each ray of sun that shines on the misery and heartache that this world truly contains.

We can sit here and demand of ourselves the memory of that perfect moment, that perfect sunset, that perfect smile. We can sit here and demand that we don’t forget the reason some preacher on a pedestal gifts us in his own blindness. We can argue about the human spirit and its ability to find itself beyond what it once believed it could endure; or we could admit the ability was there from the moment we took our first breath. The world in its fame is not an easy and not a beautiful place to be. And for every second of perfection I will easily give you a lifetime of heartache.

I have been thinking of those grains of dirt lately. I have been thinking about who and how I will one day leave this earth. It is a metaphysical question we are forced to look at sometime in our life; and while it might not be your turn, it most definitely is mine.

I don’t care how I die; I don’t care about the soul that will eventually die. Who that person is and what that person becomes is far beyond my control today. Maybe that is because I change who and what I am becoming as quickly as the seas move; or maybe it is a simple matter of my soul refusing to allow myself the eternal damnation of being put into place by a world who does not like me. Maybe the truth is that my soul is a fascinating, ever-changing, and oftentimes confusing mass that can only be read and only be understood by my own self.

I think that I am growing up. I think that for the first time in my life I am stopping to watch that grave digger and watching his task not for perfection but for the finality that it represents. Each easy dig is another moment I am forced to realize about myself those things that I have easily kept under wraps in the strength of youth. There was a time when I could hide who and what I am; there was a time when it wouldn’t have mattered how I reacted or why I reacted; it would only have mattered if I could have walked away.

These days for whatever reason I am finding it harder to walk away. I am finding the anger that I feel for those that profess to love me, the anger I feel for the unfairness of a single word, and the amazingly ugliness that accompanies the most beautiful things to be part of the dirt that is slowly making room for the person I am. The anger, more than any other emotion, constantly makes me wonder if the person I am and the person I am trying to be will ever be successful. The anger that allows me to sit and watch that grave digger for hours at a time, while I shift through the seriousness of these emotions, brings to fore a pain unlike any I have ever felt.

I haven’t been able to systematically work out who it is I am angry at; the whole of the emotion seems so large and so encompassing that I find myself wondering if the dirt covering me will one day show signs of the red anger that burns. I haven’t been able to figure out the person, the reason, even the moment that so many people have let me down or the number of times my own beliefs forgot this world’s cruelness. The emotional journey is not emotional; today it is simply a physical knife in the soul of my own faiths.

There were days I would have sang that the dirt was powder soft and filled the holes in my life so easily. There were days I would have proclaimed that the dark wasn’t the end and that the angels that accompanied me to bed each night were standing right beside me to give to me that little extra gift that only dreams can feel. I can remember all those days when the anger and even the fear of the anger was pushed into the next world so that I could continue to learn to fly. But that sweet silver moonlight has long ago lost it promise to me.

Will that grave digger be weighted down by the anger that pervades my soul so that even in my nightmares, I feel it? Will I ever be able to figure out who to forgive and even how to forgive? Am I destined to have this anger in my soul because of the disappointments, the disillusionments, the realities that this heart is forced endure over and over? Am I forever going to feel the wings of those angels and know that they are passing me right by?

The grave digger never digs his own grave. The grave digger calmly and with a breathtaking commonality digs and moves the dirt so that our shape may fill a place that can only be our certainty in this world. And despite the anger doesn’t the grave digger simply keep at his task? For the soul, in its own disappointments, will never allow us to forget him.