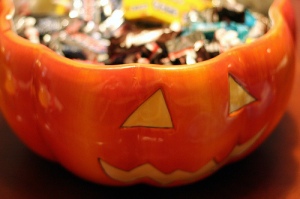 It is that time of year again. For me it is a time when the weather gets simply excruciating, when pumpkins are carved only to be thrown away and when the kids of each neighborhood get to dress up in their favorite hero or monster and roam the streets. It is a sweet holiday where small children learn the wonder of masses of quantities of candy and their parents limitations on sugar highs.

But like anything it to can be ruined. It can be ruined by the parents who watch indulgently while their children run wild up and down the neighborhood, not using manners nor enough common sense to stay out of the street where cars full of new drivers and frustrated office workers are speeding home. It can be ruined by children too old for trick-or-treating destroying the purpose of the holiday; the purpose to simply give children a chance to dress up as their fantasies and for one night live joyously in simplicity. It can be ruined by those same teenagers running the streets who believe completely that the rules of the game were not meant for them and often coached by the very parents who should be there teaching them differently.

But we don’t teach our children differently in the great scheme of things. We teach them that manners and even basic kindness is not as important as the heaviness of the candy bag being carried. We don’t teach our children that there is a limit to freedom, a limit to the fantasy, and sometimes you are forced to sit on the sidelines while the new crop of young ones get their turn. We don’t teach our children that sometimes what you want in this life, and even sometimes what you believe in this world to be right is sometimes simply wrong. We are a generation who were raised in the premise that our thoughts, our actions, even our shots at glory were worthy. There was nothing we could do, no manners we actually needed, nothing that could stand in our way to greatness.

There are very few things in this world that make me angry. I have spent too many years with a disease that makes me an instant monster (don’t even stop at go) to get very angry on my own behalf. I have spent too much wasted time trying to convince others that I am not a monster; that underneath all the medicine and all the trappings, I am simply a girl.

To make me angry you only have to do one thing; you have to give up the right to any decency of humanity and act like the lowest of beings. You have to disregard the rules because your child runs faster than those four year olds racing against them. You have to ignore the decency of a tearful child learning that their was no candy for her, because you decided it was all for you and your child. And the icing on the cake you have to pretend it was all an accident, that you didn’t hear the rules.

There are few things that make me angry and even less that make me hate. But all you mothers who have raised your children to believe that they deserve to ignore the rules, step over those younger and less than they are, I hope you go to hell. I hope you go to hell for the tears that I saw in my child’s eyes and all the other children’s eyes who were so young, especially when they ran so hard to get one simple piece of candy in the midst of children so much older than them. My daughter and tens of other young children played by the rules and lost. And maybe that is a good lessen too, but not while I have a breath in my body.

But to know that my five year old daughter has to deal with it on a night that was supposed to be a simple time of fun, is heartbreaking. I didn’t react that night to the teenagers or the mothers who acted in such a heinous way. But I memorized their faces and I can’t wait for the day karma and I finally get to have our say.