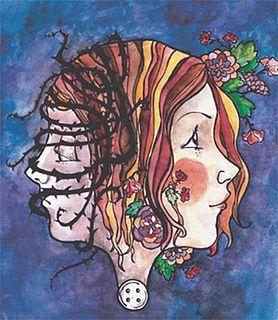 Because I am mentally ill, it is generally considered that I am sick everyday of my life. This may in some context be true. It is possible if we look at these diseases in a certain way we are rather sick. But it isn’t a term that I like to use.

Calling oneself sick, even when you are, is like admitting that there is something so wrong with you that the only thing that can save you is drugs, medicine, doctors and miracles. It takes away the perspective and leaves you in a hole of misinterpretation that can’t ultimately help you. No one on God’s green earth can get healthy if they are always sick.

But those with mental illness aren’t always easily defined. To simply say, it is a sickness, is using an excuse, an unfound conclusion to explain that which doesn’t exist. It brings to mind images of cancer stricken patients, and patients lying in beds moaning, begging to die. It bring to mind images of your head over a toilet while you throw up everything in your body. To say one is sick is to define oneself as a simple being that needs a simple cure.

We all know that there are times that our mental illnesses actually make us sick. Take the medications, add them with the ups and downs, and round it out with our own behaviors and we get sick like symptoms. We gain and lose weight, we suffer acne, migraines, headaches, stomach aches, constipation and diarrhea, and that is all on a good day. What we deal with mentally rarely shows itself physically and there simply isn’t a easy way to explain the difference.

Our loved ones see us sick. They see not the human suffering necessarily, especially after experiencing it for a year or two, but rather a series of complaints and whining. Because we suffer from side effects that aren’t seen but rather felt, much like the rest of these diseases it is hard to separate the sickness from the side effect.

This is detrimental to all of us. Most scientists agree that on average a person with a mental illness will live at least twenty-five years less than someone without these diseases. There is not and has never been an actual agreement as to why this is but I can posit a few ideas:  after going to doctors every week of every year of my life, I am not interested in seeking medical help for anything beyond the obvious. After dealing with these side effects as a direct result from the disease that cannot be cured, an extra headache, or blurred vision, or any of the other symptoms of serious diseases seem to be just another symptom in this list. And after being ignored by those we love when we complain about very real symptoms, how are we going to find the strength to make the doctors appointments that might give us those twenty five years back?

It is a difficult problem with no easy solution.

This week I have been suffering from a cold. Given the vast surplus of things I deal with this might not be a big deal except the only way for my body to fight this germ is to rest and relax long enough to get back on my feet. The problem is the rest that I am taking mirrors exactly the same image as the one I preview when I am in a major depressive episode. I do the same things: I rest, I lie down, I go to bed early and I can’t eat food. So how are those I love supposed to know when I am depressed and when I simply have a cold?

It would be really nice if I could simply tell them it is different; but somewhere in this journey with this disease the ability for those I love to actually believe that one, I know what I am talking about, and two, that I am speaking the truth has been lost. It is not an outright lie they are accusing me of, but rather a suspicion that maybe I am not telling the whole truth. It is one of those conundrums where whether you tell the truth in this life or not doesn’t really matter, it only matters if the physically maladies can be pointed at and seen. And you can’t see a cold.

I admit to prevarication on occasion. I admit to speaking a white lie on occasion. And I can even admit that when I am in serious trouble I have that ability to smile and lie through my teeth that everything is okay; I think this is a talent that all mentally ill have to find within themselves. But I rarely actually outright lie to someone I love. I may sugar that truth but I find it hard to believe that I have given those I love reason not to believe that I am actually sick.

So when I get sick, as I am this week, in order to literally make those I love believe me, I have to go to a doctor and get written proof – usually in the form of a prescription – to show them that it is okay if I sit on my butt for a couple of days and do nothing. I have to take the time and energy to justify my own decisions not because of my supposed lies but because there is no way my loved ones will accept my word.

I have had this disease of mine for a very long time. I have run the gamut of emotions and events and have lived to tell about it – sometimes by the skin of my teeth. I know what a side effect from a new medication feels like versus a side effect from one of my base drugs. I know without a doubt when my symptoms are mimicking not mentally ill issues but actual physical germs. I know what is going on in my body. But because I can’t point to a cold and say see look there it is, I am condemned to justifying the actions that I must take to better myself.

For years I would ignore the colds, the flu, the sinus pressure, the easily explained problems because I didn’t want to deal with another doctor or be made to feel that I have to justify anything. Usually this didn’t end well – in case you are considering this route – I usually ended up with pneumonia wishing that it didn’t have to come to that result in order to get some simple rest.

But a funny thing has happened to me lately. My guilt at being a stay at home person has caused me to take even more drastic measures to prove that I have a right to stay in my own home all day. And all those drastic measures accumulate in going to the doctor so I can take a day off and rest. Because being sick isn’t enough, I have to prove it to a jury of my peers.