A wise woman once told me that the truth, the things we need to learn most in this world, do not come from books, from our own life lessons, but from the world viewed by a child. I freely admit that when I heard that I thought the woman was about as close to the truth as I am to the sun. I knew that life lessons were the bread and butter of who and what I was to become; I didn’t then need a child to teach me differently.

I have since learned that I am wrong. Really, wrong.

I have learned that what I know about joy is nothing compared to a child’s wondrous adventures through an apple orchard. I have learned that conflict resolution is not about pieces of worthless paper but rather the talking and apologizing of wrongs over games of Pokemon.

I have learned that beauty isn’t about matching clothes and perfect makeup but a glittery tutu that can only be worn with a kind of perfection over our winter clothes. I have learned that money, while consuming, has nothing on Santa Claus or the ability to make a great argument for why a parent should pay.

I have learned that sometimes manners aren’t as important as speaking up. Talking and making a point can sometimes super cede the need for please and thank you. While manners always need to be returned to, they can at times be forgiven during times of greatness.

I have learned the art of walking away from an argument and how few times in our life we actually do this. I have learned that being good, and giving as good as you got, is the original purpose that God intended. Not greatness but being simply good.

This is a large world, with amazing wonders, but so few see it as we wrap ourselves in our own truth and own disappointments. Cloaks of bad days that aren’t bad, and days of hardship that any other day we could conquer; absences of own innocence can be wrapped in such packaging as to be dark and sad and we break without a light to show us the way.

Children see this world differently. It is as if the world forgives them more easily and uses opportunities to make them into greatness, rather than leaving them on the side of the road to fend for their own existence. It is as if the world gives those who don’t have many chances dreams to get them through the new realities of life. Children, from all ages, from all backgrounds, can survive when those of us who are older and supposedly wiser tend to crumble. Forgiveness is not impossible and the life of truth and adulthood is but a strange and feared world of make believe and pools of gum drops. 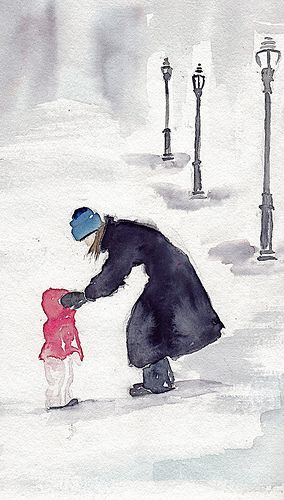 Children have an ability to be great beyond what we ourselves can do. They can show bravery simply my continuing the pursuits of happiness when the rest of us have given up. Even those children who suffer great sicknesses have a perfection about them that we, as adults, can’t compete with. We have lost it.

And the worst part is no one can define “it”. What is “it” that we have lost? What is it that we can’t find in our selves any more and when and at what time did we lose it? Why can we pursue great passion but only do so under the umbrella of great madness? Why do we drop to our knees often to find the hope we need to exist when once we simply knew it was there?

What makes us different than the child we once were. The life lessons that we weren’t supposed to always pay so much attention to? The challenges that we built in our skies in order to ignore the work it takes to learn to spell the next twenty words our teacher gave us? The darkness we cloak ourselves in because the light is too bright and shines on our faults?

I have more questions about children than answers. And although I watch the children closest to me for signs that they know something I haven’t seen in a long time, I can’t find the clue to the answer. Although I study them, that definitive characteristic that is greater than the mere presence of innocence, isn’t recognizable. You can’t measure it and time it. Children simply have it.

But the problem with not measuring it and not timing it is we can’t build on it. We lose it as surely as our children will lose theirs. We can’t hold onto it, or teach those children to hold onto to it, because something stronger interferes and they lose it. Is it the powerful emotions of jealousy, ambition, and even hunger that chases that thing only children have away? What is so different from the child and the adult?

And is it more important to be the child or the adult? Is it simply natures’ way that we succumb first to the innocence and then to the reality? Is it simply life’s way of making sure that we can survive, that we forget all the instinctive tools to do just that?

I think what I have learned most from my children is that I am not them. And while there is some truth in the idea that I should emulate them, the remainder of the truth lies in the knowledge that I cannot. I cannot be a child and despite how I long for the reality of fairy tales, I am stuck with the pungent truth of my own nightmares.

2 thoughts on “Learning From Our Betters”